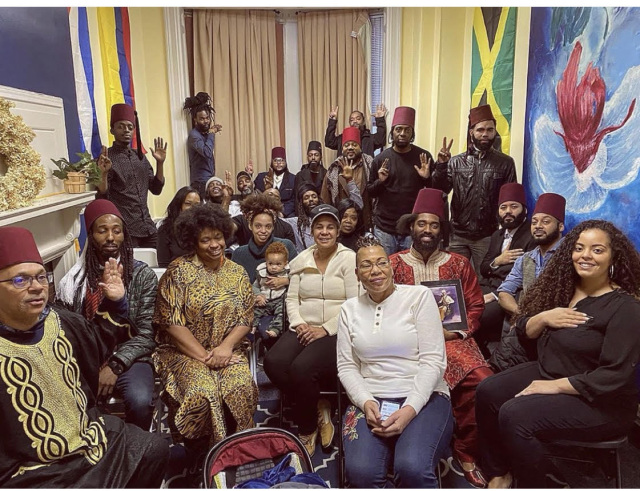 "I truly believe that most of the skills that have been instilled in me through military training can be used to uplift our nation and all Moorish Americans. Honor, Courage and Commitment are the Marine Corp Values. Those same values that every Marine is held to, fit perfectly with the High Principles of Love, Truth, Peace, Freedom and Justice that our Prophet, El Hajj Sheriff Abdul Ali instructed us to live by.

I joined the military thinking I would be helping our people, who at that time I was trained to think we were 'Black'. I now know of the 'King Alfred Plan’ and the FBI’s Counter Intelligence Program with their objective to use our men as the tip of the spear for European World Domination, Imperialism and to prevent any of us from becoming what they call a “Messiah”. They fear that this Messiah will unify, electrify and unit the different Militant Moorish groups to form a unified and solidified front against their terrorism. They quote that this unified military will bring out a true “Mau Mau”, or what they call a true Black (Moorish) Revolution on the Continents of America.

The Mau Mau Uprising was a war in 1920–1963 was between the Kenya Land and Freedom Army (KLFA), also known as Mau Mau, and the British colonists. Members of the Mau Mau are currently recognized by the Kenyan Government as freedom-independence heroes and heroines who sacrificed their lives in order to free Kenyans from de facto British Colonial rule.

I will continue as the Prophet did, to work day by day, in public and in private to continue his great Missionary work to uplift fallen humanity and reinforce the foundation of the Moorish Movement - The minds of the People." – Chairman Jamhal Talib Abdullah Bey

The main focus of Rise of the Moors is to perform all things relating to and appropriate to portraying the overall history of our ancestors - the Olmecs, Moabites, Canaanites, Hittites etc.; By informing all Moors of their political status here in the Maghreb Al Aqsa (America – Morocco the most extreme west); Enlighten the minds of the fallen Moors, restoring them the their ‘In Full Life,’ ‘In Propria Persona Sui Juris’ status, as opposed to the mentality of a minor who is ‘Civil liter Mortuus’; to promote a collective of Moorish Americans and connecting them to the Rise of the Moors social and economic platform; to promote the use of moral principles and the branches of knowledge dealing with ethical awareness; to encourage all Moorish Americans to believe in the capacity of each other to succeed in business, to encourage, support and provide patronage in our affairs.

Our business endeavors will achieve its highest in fulfillment and confidence with the cooperation and patronage of all nationals and especially emphasized whenever possible between other Moorish Americans.

The Prophet Noble Drew Ali told us to stop clinging to those names and principles that delude to slavery. With this being said, below are some of the Rise of the Moors aims for the future of our nation.

We will have freedom - full and complete freedom.

We will invoke justice. Equal justice under our own law, and not under the united States government, as we are not citizens of the united States. See the original 13th Amendment with its 20 sections and the proceedings and debates of the 90th congress 1st session volume 113 part 12, June 12 1967, page 15641, stating that the 14th Amendment is unconstitutional.

We will fight for the freedom for all Moors now held in state, federal, and ICE prisons. This issue is rooted in the unconstitutional 14th Amendment and the unlawful naturalization laws of the United States. It was stated in the Dred Scott v Stanford case that Black and other African descendants i.e. Moors were never meant to be citizens of the United States… GOOD! We have the right to form our own government! But to prevent us from having our own sovereign power, the Europeans created the 14th Amendment and lied about its effect in law, in order to submit us to the very abuses we are suffering from to this day. In law, this issue is called Status and Jurisdiction. They stripped us of our nationality (status) and convinced us we were citizens of their Colonies which subjected us to their jurisdiction. This applies to our family from South America and the Islands as well. Since the Naturalization laws are predicated on the 14th Amendment and it is not law, none of the Moors from South America or the Island can lawfully or constitutionally be detained by ICE or deported from North America. As the United States European Colonies and America are two separate jurisdiction and the United States has no right to remove people or allow people to come to our lands. The reason they do, is because we have failed to form our own government and military to combat their domestic terrorism.

We also know that the United States / united States is obligated to maintain and supply our needs in this separation from them and the establishment of our own government for the next 30 years–until we are able to produce and supply our own needs. This obligation and liability stems from their involvement in the enslavement and practice of genocide against our people, as well as their signed obligation of the United Nations Decleration on the Rights of Indigenous people.

Since we cannot get along with them in peace and equality, even after signing a treaty with them in 1786 and receiving in return some of the worst treatment human beings have ever experienced, we believe our contributions to this land and the suffering forced upon us by the European colonists and inquisitionists, justifies our demand for complete and utter separation, while also enforcing the rights of indigenous people and demanding that they recognize our elected officials on a municipal, county, state, federal and international level. See ‘Act of State Doctrine’

We will also have an immediate end to the domestic police terrorism and mob attacks against all Moors on the continent of North America. It is a fact of law, enforced by the constitution set at article 6, 28 CFR 50.5 and Articles 20 and 21 of the treaty of amity and commerce between our nation and the united States - that the Federal government MUST intercede to see that all Moorish men and women tried in State courts receive justice in accordance with the laws of the land – which means the case must be removed to federal courts for lack of jurisdiction on behalf of the state courts and our government must be contacted immediately to allow us to reestablish ourselves as an independent nation, dedicated to justice, freedom and liberty while allowing our Consuls and Mufti’s to be present to protect our nationals.

Since we are not citizens of the united States, we owe no tax obligations to the government of the United States. Therefore, we will assist our people seeking work opportunities to fill out the W-4V from or I9 IRS forms when necessary.