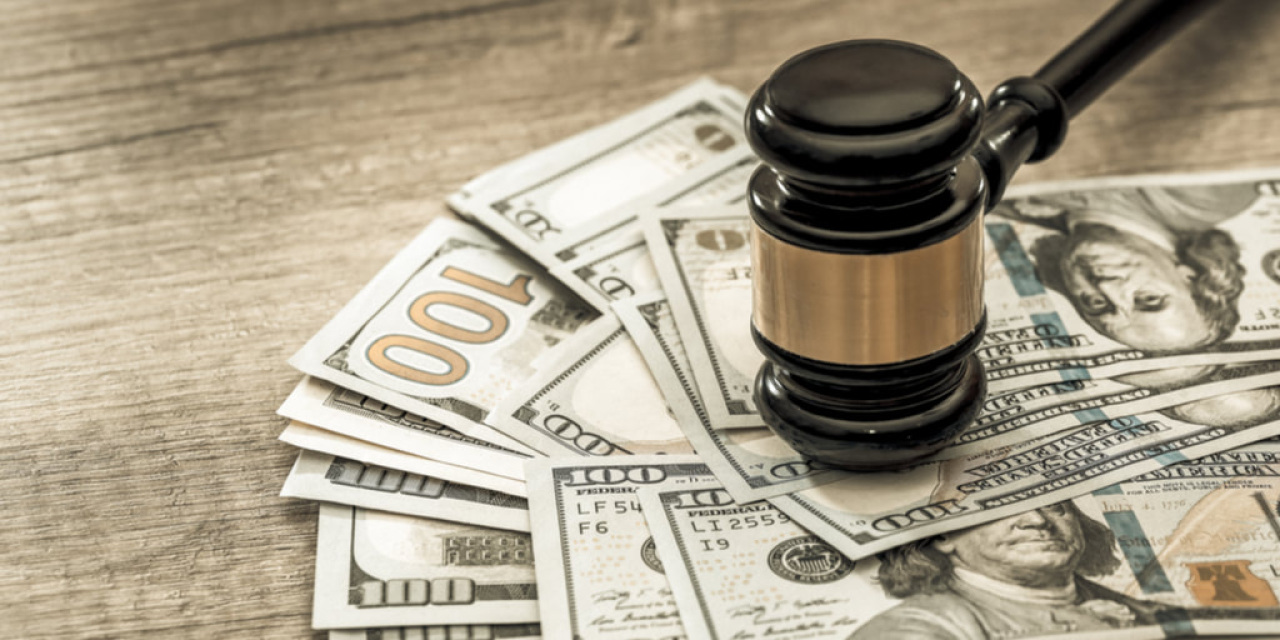 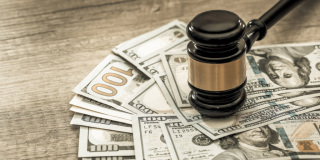 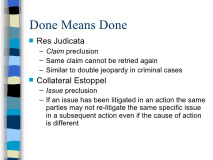 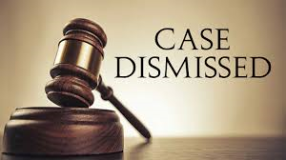 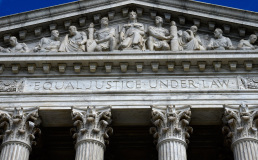 Res Judicata is a principle or maxim in law that deals with cases already adjudicated and said cases, either quotes or the case itself is then used for substantiating the accuser or defendants proof of claim; expression of pre-existing rights, constitutional enforcement, the adherence to due process, or commanding the courts to act on a matter, make a decision or issue a judgment or decree in your favor, et alia.

Res judicata (RJ) or res iudicata, also known as claim preclusion, is the Latin term for "a matter [already] judged", and refers to either of two concepts: in both civil law and common law legal systems, a case in which there has been a final judgment and is no longer subject to appeal; and the legal doctrine meant to bar (or preclude) continued litigation of a case on same issues between the same parties. In this latter usage, the term is synonymous with "issue preclusion". In the case of res judicata, the matter cannot be raised again, either in the same court or in a different court. A court will use res judicata to deny reconsideration of a matter.

The doctrine of res judicata is a method of preventing injustice to the parties of a case supposedly finished, but perhaps also or mostly a way of avoiding unnecessary waste of resources in the court system. Res judicata does not merely prevent future judgments from contradicting earlier ones, but also prevents litigants from multiplying judgments, and confusion. Res judicata includes two related concepts: claim preclusion and issue preclusion (also called collateral estoppel or issue estoppel), though sometimes res judicata is used more narrowly to mean only claim preclusion.

Claim preclusion bars a suit from being brought again on an event which was the subject of a previous legal cause of action that has already been finally decided between the parties or those in privity with a party. Issue preclusion bars the re-litigation of issues of fact or law that have already been necessarily determined by a judge or jury as part of an earlier case. Res judicata is intended to strike a balance between competing interests. Its primary purpose is to assure an efficient judicial system. A related purpose is to create "repose" and finality.

Justice Stewart explained the need for this legal precept as follows:

Federal courts have traditionally adhered to the related doctrines of res judicata (claim preclusion) and collateral estoppel (issue preclusion). Under RJ, a final judgment on the merits of an action precludes the parties . . . from re-litigating issues that were or could have been raised in that action. Under collateral estoppel, once a court has decided an issue of fact or law necessary to its judgment, that decision may preclude re-litigation of the issue in a suit on a different cause of action involving a party to the first cause. As this court and other courts have often recognized, res judicata and collateral estoppel relieve parties of the costs and vexation of multiple lawsuits, conserve judicial resources, and by preventing inconsistent decisions, encourage reliance on adjudication.

Generally, res judicata is the principle that a cause of action may not be relitigated once it has been judged on the merits. "Finality" is the term which refers to when a court renders a final judgment on the merits.

Res judicata is also frequently referred to as "claim preclusion," and the two are used interchangeably throughout this article.

Breaking Down the Concept

Claim preclusion can be best understood by breaking it down into two sub-categories:

There is a litany of cases dealing with res judicata. Courts, often uphold the doctrine, and typically justify res judicata based on several polices:

Does Claim Preclusion Apply for Adjudication Not "On The Merits?"

According, however, to Rule 41(b) of the Federal Rules of Civil Procedure, the following are not claim preclusive and are not considered an adjudication "on the merits":

Many jurisdictions also find that res judicata applies to a "dismissal for a failure to prosecute." This phrase refers to an involuntary dismissal of a plaintiff's claims when the plaintiff fails to comply with the court's orders in some ways. These dismissals, however, are highly reviewable by appellate courts to ensure that the trial court was not abusing its discretion.

Some jurisdictions also follow the "Common Law Compulsory Counterclaim Rule." This rule states that if "Party A" fails to assert an available counterclaim during "Trial A," then "Party A" is precluded from suing in "Trial B" if granting relief of that action would nullify the judgment from "Trial A."

In addition to bar and merger, there are two other techniques that courts look to which have the same effect on a cause of action as claim preclusion:

In judicial proceedings, claim preclusion only applies to adverse parties, it does not apply to co-parties (ex: a party that has been joined via Federal Rule of Civil Procedure 19 or Federal Rule of Civil Procedure 20). Contrast this rule with collateral estoppel (also known as "issue preclusion"), which applies to both co-parties and adverse parties.