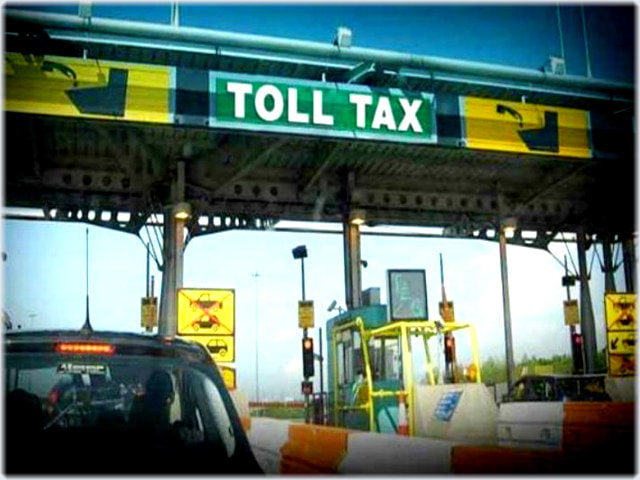 According to Law, a Toll is equivalent to an Excise and a Tax:

Toll: An excise of goods; a seizure of some part for permission of the rest. It has two significations: A liberty to buy and sell within the precincts of the manor, which seems to import as much as a fair or market; a tribute or custom paid for passage.

Tax: A pecuniary burden laid upon individuals or property to support the government, and is a payment exacted by legislative authority. In re Mytinger, D.C.Tex., 31 F.Supp. 977, 978, 979. In a general sense, any contribution imposed by government upon individuals, for the use and service of the state, whether under the name of toll, tribute, tollage, gabel, impost, duty, custom, excise, subsidy, aid, supply, or other name. Story, Const. § 950. And in its essential characteristics is not a debt. City of Newark v. Jos. Hollander, Inc., 136 N.J.Eq. 539, 42 A.2d 872, 875.

Excise: An inland imposition, paid sometimes upon the consumption of the commodity, and frequently upon the retail sale. 1 Bl.Comm. 318; Patton v. Brady, 184 U.S. 608, 22 S.Ct. 493, 46 L. Ed. 713; Portland Bank v. Apthorp, 12 Mass. 256. An excise has been defined as meaning tribute, custom, tax, tollage, or assessment, a fixed absolute and direct charge laid on merchandise, products, or commodities without any regard to amount of property belonging to those on whom it may fall, or to any supposed relation between money expended for a public object and a special benefit occasioned to those by whom the charge is to be paid. In re Opinion of the Justices, 282 Mass. 619, 186 N. E. 490, 491. An excise is an impost for a license to pursue certain callings or to deal in special commodities or to exercise particular franchises. East Ohio Gas Co. v. Tax Commission of Ohio, D.C.Ohio, 43 F.2d 170, 172.