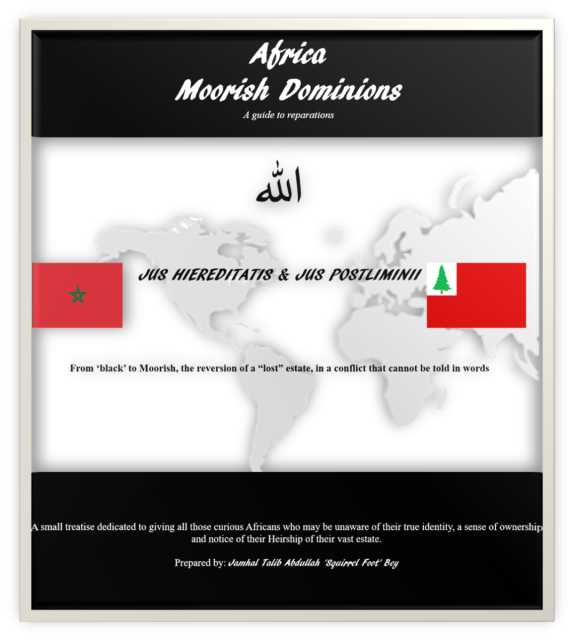 We are not black, we are Moors. Those Dominicans, Haitians, Tainos, etc. do not come from blacks, they are descendants of Moors, hence the Spanish word, Morena and Moreno. The Moors of North America have been branded “black” by European Colonial occupiers of our land in order to strip us of our illustrious history. Our ancient Moabite, Canaanite and Hittite blood lines tie us to the Ancient Olmecs of Central Amexem (America), the Aztecs (Mexica) even the Dogon of Mali. Our ancient ancestors are the possessors of great ancient cities and kingdoms such as Sumer, Mari, Timbuktu, Catharge, Córdoba, Mauritania (North Africa) and Tamari (Egypt / Kemet). Our disconnect from recognizing our ancient blood line, nationality and heritage is the very reason why the Pale-Skin-Black-Nations-of-Europe have been administrating the earth! The following maps, excerpts, definitions and annotations will be used as ancillary supports in order to prove that indeed, we are all Moors.

In another book, ‘An Album of Rhode Island History 1636 – 1986’ By Patrick T Conley, under the section, Indians and Explorers, Pre - 1636 Chapter 1, the author, like our Prophet, Noble Drew Ali, refers to us as Asiatics.

It was entirely necessary and pivotal for the European Conquistadors to brand us Indian and Black, as it provided mandate for them to steal our lands. Us taking on the brands, negro black and colored, to which, Indian is listed under the term ‘colored’ within the United States Census Bureau, removed us from the human family, thus reducing the Universal Karma of violating divine law and killing a human being and other mistreatments perpetrated against us by our colonial oppressors.

As stated by our Prophet, Noble Drew Ali, “...there is no negro, black, or colored race attached to the human family...” thus, when a black, colored, or negro “man” is killed, no violation of divine law has occurred. It is important to know that the phrase “colored person,” has no standing at law. (see Henry Campbell Black’s Law dictionary 4th Edition.)

The word ‘Color’ as defined by the aforementioned law dictionary, means ‘a fake’, ‘a fraud,’ or an ‘Artificial person’ as distinguished from a ‘Natural person’ i.e. a Human being. It is of upmost importance for all humans to know that the human race / human species is identified by national origin i.e. nationality.

Evidence of the importance of branding us can be found in many books, for an example ‘The Culture of Native North Americans’ Edited by Christian F. Feest

“When in 1492 Columbus mistook the people of the Antilles for natives of India, he could not have guessed how far-reaching the consequences of his error would be. [Hinting towards the massive Denationalization of the Moors; now branded Negro, Black, Colored, Indian, Spanish, Latino etc.] More than 500 years later, the peoples of America are still designated “Indians”; as if they were a more or less homogenous population. Nothing can be further from the truth.” Page 10

“The “Indians” are not a people inhabiting the wild expanses of the American Continent. Their place of origin and residence lies in the realm of the imagination of the Europeans… with their confusing diversity and contradictions [in regard to the Europeans attempting to form a school of thought revolving around the Moors branded “Indians” being savage, uncivilized etc.] the “Indians” quickly became the embodiment of the “other,” providing a counter example of what was good and of what was bad in the observers culture to those believing in progress, the “Indians,” represent the “Savage,” living witness to a European past believed long overcome. Page 13

Annotation: The idea of the “Indians” being savage was very crucial for European conquest and their social-engineered-mind-control agenda. Branding the Moors “savage,” and “Indian” gives cause for the effect of murder, land theft, forced assimilation and genocide i.e. Birth Right Theft.

Sold out
Add to Cart