Ruffin v Commonwealth, 62 Va. 790, 796: For a time, during his service in the penitentiary, he is in a state of penal servitude to the state. He has… not only forfeited his liberty, but all his personal rights… He is… a slave of the state. He is civiliter Mortuus; and his estate… is administered like that of a dead man. 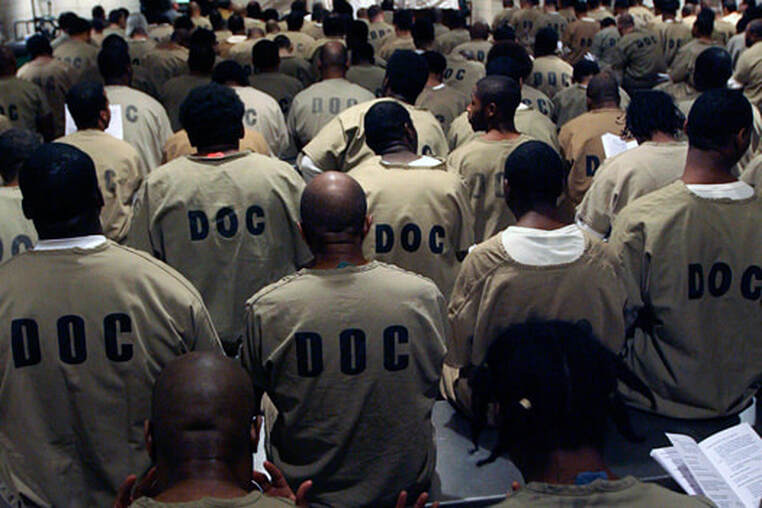 The Black Codes, sometimes called Black Laws, were laws governing the conduct of African Americans (free and freed blacks). In 1832, James Kent wrote that "in most of the United States, there is a distinction in respect to political privileges, between free white persons and free colored persons of African blood; and in no part of the country do the latter, in point of fact, participate equally with the whites, in the exercise of civil and political rights." Although Black Codes existed before the Civil War and many Northern states had them, it was the Southern U.S. states that codified such laws in everyday practice. The best known of them were passed in 1865 and 1866 by Southern states, after the American Civil War, in order to restrict African Americans' freedom, and to compel them to work for low or no wages.

Since the colonial period, colonies and states had passed laws that discriminated against free Blacks. In the South, these were generally included in "slave codes"; the goal was to suppress the influence of free blacks (particularly after slave rebellions) because of their potential influence on slaves. Restrictions included prohibiting them from voting (North Carolina had allowed this before 1831), bearing arms, gathering in groups for worship, and learning to read and write. The purpose of these laws was to preserve slavery in slave societies.

Many of the laws codified in the Christian Black Slave Codes are in existence today. I will be going over 2 of them.

They are: (1) BLACKS SHALL NEVER OWN PROPERTY and (2) BLACKS CAN NOT BEAR ARMS WITHOUT PERMISSION FROM THEIR MASTERS.

Primary Documents:
To regulate relations between slaves and colonists, the Louisiana Code noir,
or slave code, based largely on that compiled in 1685 for the French Caribbean
colonies, was introduced in 1724 and remained in force until the United States
took possession of Louisiana in 1803. The Code’s 54 articles regulated the
status of slaves and free blacks, as well as relations between masters and
slaves. The entire body of laws appears below. https://www.blackpast.org/african-american-history/louisianas-code-noir-1724/

XII. We forbid slaves to carry offensive weapons or heavy sticks, under the
penalty of being whipped, and of having said weapons confiscated for the
benefit of the person seizing the same. An exception is made in favor of those
slaves who are sent a hunting or a shooting by their masters, and who carry
with them a written permission to that effect, or are designated by some known
mark or badge. https://www.blackpast.org/african-american-history/louisianas-code-noir-1724/

XXII. We declare that slaves can have no right to any kind of property, and
that all that they acquire, either by their own industry or by the liberality
of others, or by any other means or title whatever, shall be the full property
of their masters ; and the children of said slaves, their fathers and mothers,
their kindred or other relations, either free or slaves, shall have no
pretensions or claims thereto, either through testamentary dispositions or
donations inter vi-vos ; which dispositions and donations we declare null and
void, and also whatever promises they may have made, or whatever obligations
they may have subscribed to, as having been entered into by persons incapable
of disposing of any thing, and of participating to any contract. https://www.blackpast.org/african-american-history/louisianas-code-noir-1724/

These laws are still in force today with slightly different words used. As opposed to openly stating Blacks need permission from their masters to bear arms. The States have enacted statutes stating that everyone needs a license to bear arms and is more prone to granting ‘whites’ a license to carry as opposed to Blacks. Who are often made felons for having them without licenses.

According to all legal dictionaries, the word license literally means “Permission.” So, the slave law is still enforced, just subtly.

On the other hand. As opposed to outright saying Blacks cannot own property. Mortgages exist. According to all legal dictionaries, a mortgage does not create title to estate. Meaning, a mortgage is not ownership of property. Neither is a deed. The word deed literally just means actions. So, what gets filed in the Recorder of Deeds is notice that an action has taken place on a particular parcel of land.

Mortgages like licenses of course to hide the unconstitutionality of these slave laws, apply to all. But, as seen below, since those in power know that there is no money and mortgages are linear contracts that are void for lack of law consideration. They are able to discharge and trade property for $1.00.

MORTGAGE. An estate created by a conveyance absolute in its form, but intended to secure the performance of some act, such as the payment of money, and the like, by the grantor or some other person, and to become void if the act is performed agreeably to the terms prescribed at the time of making such conveyance. 1 Washb.Real Prop. *475.

Gina Raimondo, during the time this certified copy was received from the recorder of deeds, was the Governor of Rhode Island. She is now (2022) the 40th United States Secretary of Commerce. Notice how on the release of Mortgage, the word "Paid" was never used. And it is clear that the Bank in essence, gave a $800K house to her and her family for consideration of (not payment of) $1.00 (one Federal Reserve Note). I find it interesting that since she clearly comprehends what Fiat currency is and how USD is not money, she is now the Secretary of Commerce. I think it goes without saying that anyone who can get a $800,000.00 home for $1.00 is financially literate. More about this is discussed in our Juris Prudence Lecture Series. Click here to join.

Here is some information she may have used to accomplish this:

TREASURY NOTE. A note or bill issued by the treasury department by the authority of the United States government, and circulating as money. See Brown v. State, 120 Ala. 342, 25 So. 182.

NATIONALITY. That quality or character which arises from the fact of a person's belonging to a nation or state. Nationality determines the political status of the individual, especially with reference to allegiance; while domicile determines his civil status..

MORTUUS. Lat. Dead. So in sheriff's return. mortuus est, he is dead.

MORTUUS CIVILITER. Civil death. This incident attended every attainder of treason or other felony, whereby in the language of Lord Coke the attainted person "is disabled to bring any action, for he is extra legem mortuus"; Co.Litt. 199. He could be heard in court only for the direct purpose of reversing the attainder, and not in prosecution of a civil right; 1 B. & A. 159. He could be grantor or grantee after attainder, and the grant would be good against all persons except the king; Shepard, Touch. 231.
https://www.1215.org/lawnotes/dictionaries/1968_blacks_law_dictionary_4th_ed.pdf

Nationality is a legal identification of a person in international law, establishing the person as a subject or a national, of a sovereign state. It affords the state jurisdiction over the person and affords the person the protection of the state against other states.

Conceptually, citizenship is focused on the internal political life of the state and nationality is a matter of international law. Article 15 of the Universal Declaration of Human Rights states that everyone has the right to nationality. As such nationality in international law can be called and understood as citizenship, or more generally as subject or belonging to a sovereign state, and not as ethnicity. This notwithstanding, around 10 million people are stateless.
In the contemporary era, the concept of full citizenship encompasses not only active political rights, but full civil rights and social rights. Nationality is a necessary but not sufficient condition to exercise full political rights within a state or other polity. Nationality is required for full citizenship.
Statelessness is the condition in which an individual has no formal or protective relationship with any state. There are various reasons why a person can become stateless. This might occur, for example, if a person's parents are nationals of separate countries, and the mother's country rejects all offspring of mothers married to foreign fathers, but the father's country rejects all offspring born to foreign mothers. Although this person may have an emotional national identity, he or she may not legally be the national of any state.

Another stateless situation arises when a person holds a travel document (passport) which recognizes the bearer as having the nationality of a "state" which is not internationally recognized, has no entry into the International Organization for Standardization's country list, is not a member of the United Nations, etc.

De jure vs de facto statelessness
Nationality law defines citizenship and statelessness. Citizenship is awarded based on two well-known principles: jus sanguinis and jus soli. Jus sanguinis translated from Latin means "right of blood". According to this principle, citizenship is awarded if the parent(s) of the person are citizens of that country. Jus soli is referred to as "birthright citizenship". It means, anyone born in the territory of the country is awarded citizenship of that country.
Statelessness is defined by the 1954 Statelessness Convention as "a person who is not considered a national by any State under operation of its law.” A person can become stateless because of administrative reasons. For example, "A person may be at risk of statelessness if she is born in a State that applies jus sanguinis while her parents were born in a State that applies jus soli, leaving the person ineligible for citizenship in both States due to conflicting laws." Moreover, there are countries in which if a person does not reside for a specified period of time, they can automatically lose their nationality. To protect those individuals from being deemed "stateless", 1961 Statelessness Convention places limitations on nationality laws. See 1961 Statelessness Convention, arts. 6–8.