We are asking for one thing, to be given that which is owed to us. In estate law, this is known as the heirs right of claim and the right to reversion, whereby the belongings of an heir are returned to them. This can be explained simply with an example of what a “lost and found box” is. Where one’s items are placed in a box, waiting for the rightful owner to lay claim to it. Once the owner can prove ownership, the items must be returned.

Since it has already been declared in HR 0689 and HR 1203, amongst other documents, whereby the United States have declared and publicized the official recognition of Moorish Americans as aboriginal and indigenous to continental land masses of North, South and Central America, to include the Island, thanks to the works of Prophet Noble Drew Ali. We have the rightful heirship claim to the land and the US must recognize all claims made thereto.
​
Thus, the Rise of the Moors organization is established to continue the civic and religious/spiritual work of Drew Ali and teach what is necessary to the descendants of the ancient Moabites who, due to the Europeans colonization of the Americas, now think they are negro, blacks, colored, Hispanics and Indians. We must teach them what is necessary to make them better citizens of our own free national government. To which, the US has already recognized that we are a separate nation and government from them based on the afore mentioned House Resolutions. Thus, the mentally freed Moorish Americans must be taught their civic duties, and from the teachings of the Rise of the Moors civic organizations, the Moors will be able to elect their own Mayors, Councilmen and statesmen that will be charged with, among other things, maintaining a military for national security and, via the treaty established by our ancestors, maintain or cause to be maintained the peaceful intercourse with the US and other nations and quasi-nation states.

Since the US, their officials and informants are responsible for continuously waging a war against the denationalized-Moors, as customary after a series of conflicts and war, the US is responsible for making of amends for the wrongs they have perpetrated, by paying money to or otherwise helping those who have been wronged. This does not mean providing housing, it means allowing Moorish Americans to lay claim to their own or other abandoned properties with the US and the several states assisting in the repair and maintenance of said properties until the Moorish people are self-sufficient, maintain self-autonomy, and are able to provide for ourselves without assistance from outside countries. 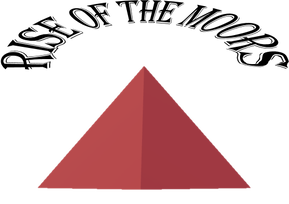 The main focus of Rise of the Moors is to perform all things relating to and appropriate to portraying the overall history of our ancestors - the Olmecs, Moabites, Canaanites, Hittites etc.; Informing all Moors of their political status here in the Maghreb Al Aqsa (America – Morocco the most extreme west); Enlighten the minds of the fallen Moors, restoring them the their ‘In Full Life,’ ‘In Propria Persona Sui Juris’ status, as opposed to the mentality of a minor who is ‘Civil liter Mortuus’; to promote a collective of Moorish Americans and connecting them to the Rise of the Moors social and economic platform; to promote the use of moral principles and the branches of knowledge dealing with ethical awareness; to encourage all Moorish Americans to believe in the capacity of each other to succeed in business, to encourage, support and provide patronage in our affairs.
​
Our business endeavors will achieve its highest in fulfillment and confidence with the cooperation and patronage of all nationals and especially emphasized whenever possible between other Moorish Americans.

The RISE OF THE MOORS is a civic organization and is therefore tax-exempt.  In Erie Endowment v. United States, 316 F.2d 151, 156 (2d Cir. 1963), the court, in defining a civic organization, summed up the matter by stating that "the organization must be a community movement designed to accomplish community ends."
​
Civics is the study of the rights and obligations of citizens in society. The term derives from the Latin word civicus, meaning "relating to a citizen".

The Internal Revenue Code provides for the exemption of different types of organizations with their own distinct qualification requirements. They are:
Social welfare organizations: Civic leagues or organizations not organized for profit but operated exclusively for the promotion of social welfare, and
Local associations of employees, the membership of which is limited to the employees of a designated person(s) in a particular municipality, and the net earnings of which are devoted exclusively to charitable, educational or recreational purposes.

26 U.S. Code § 501 - Exemption from tax on corporations, certain trusts, etc.
https://www.law.cornell.edu/uscode/text/26/501
List of exempt organizations
Corporations, and any community chest, fund, or foundation, organized and operated exclusively for religious, charitable, scientific, testing for public safety, literary, or educational purposes, or to foster national or international amateur sports competition (but only if no part of its activities involve the provision of athletic facilities or equipment), or for the prevention of cruelty to children or animals, no part of the net earnings of which inures to the benefit of any private shareholder or individual, no substantial part of the activities of which is carrying on propaganda, or otherwise attempting, to influence legislation (except as otherwise provided in subsection (h)), and which does not participate in, or intervene in (including the publishing or distributing of statements), any political campaign on behalf of (or in opposition to) any candidate for public office.

Civic leagues or organizations not organized for profit but operated exclusively for the promotion of social welfare, or local associations of employees, the membership of which is limited to the employees of a designated person or persons in a particular municipality, and the net earnings of which are devoted exclusively to charitable, educational, or recreational purposes.